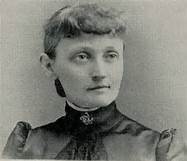 Emma Curtis Hopkins was born September 2, 1849. She was a spiritual leader in her own right. She was one of the early teachers of Divine Science. She was an organizer of the New Thought movement. She was also theologian, teacher, writer, feminist, mystic, and prophet who ordained hundreds of people, including women, at what she named (with no tie to Christian Science) the Christian Science Theological Seminary of Chicago.

Emma Curtis Hopkins was a student of Mary Baker Eddy, a prominent Christian Science teacher. Eddy claimed to have found in the Christian Bible a science behind the healing miracles of Jesus. She indicated that these scientific discoveries could be practiced by anyone. Emma Curtis Hopkins was known as the "teacher of teachers" because a great deal of her students went on to found their own churches. Many of them become prominent figures in the New Thought Movement.  She made her transition on April 8, 1925. Here is a list of some of the teachers that studied under Emma Curtis Hopkins. There work has made a tremendous impact.